Tentacles Ponies were created by Mea0113 at deviant art.com Who is also the Owner of Octi Puss The Tentacle pony There is also a Deviant Art Group for other Tentacle pony owners.

They first appeared on Deviant art on March 5th, 2012. And from there became semi popular.

Althought this species was greatly inspired by MLP, they are not MLP's at all. But are often confused as MLP due to being drawn in the same art style. It was the art style that inspired the Artist. Not the show. for more information please read "Are they Ponies or Monsters?"

There are Other tentacle Ponies as well as a 2nd gen. and 3rd. gen. out there. Octoponys and a certian pony named Kala Marie who has some unique tentacles herself ARe some good friends to the Tentacle pony family. However. Ocean the Sea Swallow and only Slug Pony has a very close bond with several of the Tentacle ponies from both generations.

As of July 2012, there has been a new breed of Tentacle Pony and a Seaswallow pony mixed together. They were named Tentaswallows, or the Tentaswallow Pony. Mea0113 and OrionEclipse decided to take their creations and combind them into one.

What is a Tentacle pony?

As far as we know, they come in pale/pastel colors in shades of pink, purple, green, blue, and yellow. They often have spots, and they vary in size and shape. Their manes and tails are real living appendages called tentacles and move on their own. The bottom of their hooves have “suckers” on them as well as their Tentacle. Not all Tentacle Ponies have suckers. Tentacle Ponies look a lot like Squids and Octopie or Jelly Fish, they are possibly close relatives.

In fact, thier Tentacles work in the same way as as these animals as in being able to grab things, hold things. Thier tentacles are very sesetive to touch. Thier tentacles also like warm damp places and often like to bury themselve in such places. If the tentacles are cut off, they do not regenerate.

Tentacle ponies have a slime that coats their skin. they do not have fur/hair, but a thick skin instead. Tentacle ponies were born with the inability to have offspring of any kind. Tentacle Pony foals are born with a light fuzzy coat. Which often falls of when they become fillies and colts. The tentacles of a Tentacle Pony stay the same length. Once they reach a certian age the tentacle will stop growing. This is why each tentacle pony has different lengths of tendrils. The age for when they stop varies on the pony, But it usually happens within the first 10 years of a pony's life.

Tentacle ponies have the ability to dive into the water and leap into the air. The height varies on the ponies individual weight and height. The smaller the pony, the higher. Tentacle ponies are rather slow on land, but can swim rather fast.

Their eyes glow in the dark and they can see under water.

On land they have a stong sense of smell and and a higher quality of hearing. They can also see under water

Ink? Tentical Ponies don’t create any. But for some strange reason, their blood is a dark purple, not red

What would this creature be like? What would it become? Would it lust after the flesh like it’s Father, or would it be sweet and gentle like it’s mother?
It’s been found, that tentical ponies are actually rather kind, sweet, and mostly docile. They are a gentle creature who prefers to be alone. They have a cheerful disposition and enjoy the water.

But as for it’s tenticals themselves, they are the part that lust. They have a mind of their own and often get in trouble. They touch and violate anything and everyone that is near. Tentacle Ponies usually have a desire to touch things. This desire is often overwhelming and often rules a ponies life. Some tentacle ponies surpress this desire, which makes these creatures have no control over its tenticals at times. Other times a Pony can't control it's tentacles is while they sleep.

This creature eats the same things as a Pony. Each ponie has thier own favorite foods. They often have large appetites. They eat a lot and hardly ever gain weight. They often fall asleep at random moments. And they use energy rapidly due to their tentacles moving all the time. They are omnivores. Which means they eat both fruits/veggies and meat.

They also breath air and have no Gills. Instead they have a large lung capacity similar to dolphins and and whales. Tentacle Ponies have a hidden blow hole at the end of one of thier tentacles for under water use only.. This tentacle is usually the biggest, or the least used tentacle. Tentacle ponies are not meant for deep sea diving or living under water. Although, they can stay under water for 50 mins.

They live on land, however they do need to bathe often to stay moist. Otherwise the slime coating on their skin will thicken and become sticky. Tentacle ponies have a slime that coats their skin. they do not have fur/hair, but a thick skin instead. Ponies who do not stay moist often have a foul oder to them. this will happen within 3 days. After 3 days, thier skin will become dry and flaky. this is damaging to thier sensivite skin. Their sleeping habits change often and they don’t need a lot of it either.

They often fall asleep at random moments. They just yawn, instictivly lay down and fall alsweep wherever they are. They have no control over this.

Tentacle ponies were born with the inability to have offspring of any kind. They do have male and female sex organs, through. Only male Tentacle ponies have face tentacles, also known as Face Ticklers. If a male dose not have this, then they truely are not a mae. They could be a female turned male or have both sex organs.

Tentacle Ponies or Tentaswallows with horns cannot use magic unless they are taught. ones with feathered wings cannot change weather (like Pegasus on mlp) and ones with tentawings cannot fly nor change weather. but they can performs similar movements in the water if taught. You will find that there are many of these species with horns who cannot use magic, as well as find a few with feathered wings who cannot fly or choose not to fly. Those with tentawings will swim better, not nessecarily faster. They can also use theses as extra limbs rather than wings. The Horns and feathered wings are more for blending purposes to lure in "prey".

Areas you are most likely to find the rare Tentical Pony: 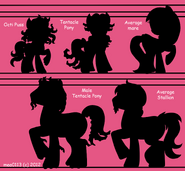 Add a photo to this gallery

Nicknames: Prefers to be called The Tentical Pony, or just Octi

Height: shorter than most tentacle ponies

Mane/tail color/style: Her mane and tail are actual tenticals. They move on their own. The are a very light lavender with a pink outline with darker pink spots.

Cutie mark: A dark purple octopus that is blushing and has a censored bar in front of it.

Personality/bio: What happens when the Tentical Monster mated with a My Littly Pony? You get the Tentical Pony! She's so adorable, you just want to huggle her... But wait, her mane and tail are moving and touching you! Oh no, Tentical Pony says she's sorry but her tenticals have a mind of their own. They can't help but do things as they please. And even though Tentical Pony is really, really sweet, her tenticals can be a bit naughty. But all Tentical Pony wants are friends. She promises to be nice, but she can't say the same for her mane and tail. And because of her mane and tail, she lives all by herself and hardly ever comes out of her cave. Nearby her cave is a river. She enjoys swimming in it. She lives in a cave away from others. She does this because she doesn’t like how her tentacles touch others without her or their permission. She’s been living in a cave for a long long time and comes out when no one is around.
Octi Puss Tentacle Pony is actually very sweet and child like. She is naturally curious because she has kept herself hidden for a very long time. She may ask some odd questions and not really know why she is asking them. She doesn't know a lot about the world. And she loves to learn new things. Octi is the smallest of her breed. She can dive into the water pretty far and leap really high into the air. She can oly do this in the water. She also has a few other skills. On land she is pretty slow. She bounces alot, but has a very keen sense of smell and hearing. She also hears better under water than most ponies. She can also see underwater and her eyes glow in the dark above and below the surface.

Likes: Her favorite food are gumi worms. She has a parcular tase in foods and sometimes comes off as picky, but most times she will try anything once as long as id doesn't fit in her yuck list. She enjoys learning about the things around her. She enjoys just watching other ponies, almost observes them. She likes to be a lone a lot.

Enviroment: She lives in a cave and that is all she will say. But near by her cave is a river. her cave is rather large and she lives all by herself.

Other info: Octi Puss often gives nicknames to those she really likes. Currently she has given the following nicknames 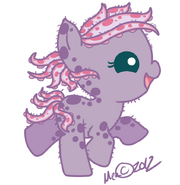 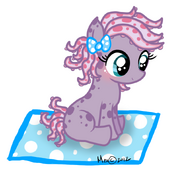 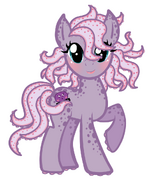 Octi Puss the Tentacle Pony Mare
Add a photo to this gallery
Retrieved from "https://tentacleponies.fandom.com/wiki/Tentacle_Ponies_Wiki?oldid=4495"
Community content is available under CC-BY-SA unless otherwise noted.